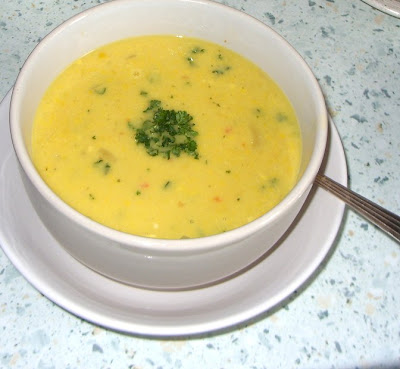 In the latest Good Food Magazine, I spotted a particularly scrummy looking bowl of soup.

Now I completely love sweetcorn in all its incarnations - from corn on the cob through to polenta.  I have also recently discovered how well sweetcorn goes with chilli - and this soup looked to be just perfectly put together.

You know how you read some recipes and you've got a vague idea how it's going to taste, but you're not quite sure?  This recipe was one that you could almost taste the soup as you read down the list of ingredients - basically, because it is little more than onion, chilli and sweetcorn in vegetable stock.

I knew I'd have two teenagers to feed on Saturday lunchtime and this seemed to me to provide perfect teenager-filling ammunition.  I know that son & heir loves sweetcorn, but wasn't sure about his friend, D.  One thing I did know about D though, was that he has eaten absolutely everything I've ever put in front of him in the past - so I was fairly hopeful.

I purposely didn't tell them that I was making the soup for them.  I've found that if you tell them you're expecting them to eat what you're making, it's tantamount to saying "diss my soup, why don't you?" and they'd have banana sandwiches or some such.

I was hoping that the smell of it cooking would be sufficient to get their taste buds interested - and so it proved.

I was tucking into my bowl of soup when they emerged from son & heir's recording studio (a.k.a. his bedroom) on the prowl for lunch.  "There's soup in the saucepan, if you want some", says I.  The sound of the lid being taken from the top of the saucepan is testament to a certain degree of interest, then the question "what is it?".  Having told them, the next sound was that of soup bowls being marshalled.  Success.

I can't begin to tell you, how completely and utterly chuffed I was, to have provided them both with a home-cooked lunch.  Quite ridiculously so.  After all, the soup really took no time at all to make, it's only a wonder I haven't managed it previously.

Anyway, getting back to the soup itself, the flavour (even though I used frozen corn, instead of fresh) was sweet and richly corny, with the fruity hot flavour of the red chilli warming the back of your tongue and the parsley providing that tiny sense of freshness that kept the taste buds interested.  I'll definitely be making this one again.

One note to bear in mind, is that when feeding teenagers, the estimated number of servings needs to be downgraded.  The recipe said "serves 6".  In fact, it served four and a bit - but then they are growing boys!

A second thing to bear in mind is the salt contained in whatever stock you choose to use.  I always opt for a low salt version and add salt to taste, however, you might want to hold off on any additional salt until you can taste to check, in the case of a standard stock cube. ADDENDUM!  :  It is now April 2014 and I have come to make the soup again.  This time, I included a finely chopped leek instead of the other onion (simply because I had one looking for a home to go to) - and I do believe it improved the depth of flavour of the soup.  Hence, I have changed the recipe to reflect this.

One other change I made to this evening's soup (we ate it as a main course, with cheese scones for dipping) was to add a teaspoonful of Essential Cuisine's cheese stock powder.  Now I do appreciate that not everyone will have access to cheese stock powder, but if you do - it is very well worth including it.  Simply mix it in with the stock when you make it up, but don't change the liquid quantity.  I think this also served to create another dimension to the flavours of the soup.

It's just getting better and better!

October 2014 : Yet another change to the soup recipe - and for the better, we all think.  I included some chopped bacon and a small sweet potato, cut into chunks - just to bulk up the recipe and make it more filling as a dinner, main course soup.  Guess what?  I've included the changes in the recipe.  ;)

1.  Heat the oil in a large saucepan over a medium heat and add the bacon.  Fry until the fat has rendered and the bacon is beginning to caramelise around the edges.  Remove the bacon with a slotted spoon and reserve.  Sweat the onion off in the bacon oil for 5 minutes or so, then add the butter and leek and cook for around 5-10 minutes - until nice and golden but not caramelised at all - stirring occasionally.

2.  Add the chilli to the pan and continue frying for about 5 mins, stirring occasionally.

3.  Add the corn, sweet potato, the reserved bacon, stock and some salt and bring to the boil.  Reduce to a simmer and cook for 10 minutes, until the corn is tender but still crisp.

4.  Transfer two-thirds of the soup to a blender and whizz to a coarse puree.  Add this back to the pan and stir in the lemon juice and parsley.
5.  Bring back up to temperature, taste for seasoning and adjust if necessary.

6.  Serve with a swoosh of double cream and a sprinkle of parsley.

Jenny Eatwell
Poole, Dorset, United Kingdom
In short, I'm a disabled 60 year old Mum of one 21 year old son and wife to a motorcycling Northerner. I love to cook and try to make the most of what's available. We are bossed about by a Jack Russell and a Bedlington Terrier and quietly watched by a Leopard Gecko.

This recipe, which came from my fevered imagination whilst I was craving stuffed peppers one day, succeeded in surprising even myself.  Oh... 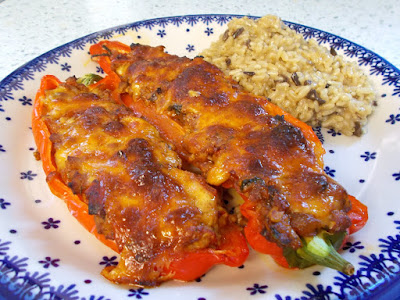